An old gem, playing the odds and some more silliness.

Explain the title first, I guess.

I have been listening to an album that was released in 1996, the singer died just before it’s release. the band (and the album) is called Sublime. i finally bought it on CD after listening to it in some form or another for the last 10 ish years. NOTE- I might be late to the party, but I enjoy it when I get there!

Playing the odds. I will start with a little story. When I was a kid, this guy appeared a lot on TV. 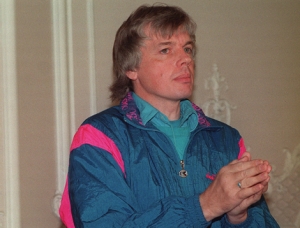 He basically had an ‘experience’ and has spent the rest of his life convinced that the world will be taken over by reptiles, or something. After seeing some of the people in politics over the last (enter amount depending on your cynicism and humor level) years, he may have a case. I guess my point is the ‘prediction’ part. certainly not the shell suit.

on Tuesday there was a lot of buzz around the lunch table about someone predicting a big earthquake to happen. it was supposed to happen yesterday. There has since been some reports on news websites. I will break it down.

There is a 70% chance there will be a ‘big’ (significant damage) earthquake in Tokyo in the next 4 years. There is also ongoing predictions of the ‘big one’ due to hit Shizuoka prefecture. the latest is 88% in the next 30 years.

What happened in Sendai was tragic, and Japan is one of, if not, THE most earthquake prone countries in the world.

I don’t really know how to react to it all. I love japan and I want to stay here, and I am fully aware of the risks and the unpredictability of location, depth and intensity of such an event. It is a very weird situation.

Anyway, just needed to get that out there.

So, in uncertain times in more ways than one, the silliness will once again make an appearance. soon.