Between Christmas and new year, we went to Matsumoto and Hakuba for our winter vacation. After 3 days of snowboarding, my legs felt like lead walking in treacle (tough life, eh?!) but the end-of-day onsens were well worth it and soothed my aging limbs. The scenery was spectacular, the powder was like nothing I have ever ridden before. It was initially frustrating that I was knee and ankle-deep in powder snow, but eventually it turned into an awesome, ‘route one’ approach to riding down steep hills and going in between trees!

Two special mentions. At the top of the gondola on Hakuba 47 resort, I saw these two, and nearly dropped my snowboard so I could take a picture. 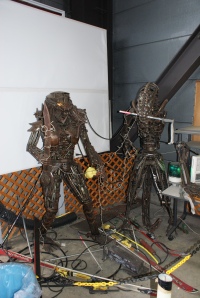 Just as cool, was what I affectionately called the ‘BusTrainBus’. It was a bus, that looked (AND SOUNDED) like a train. But it was a bus…! 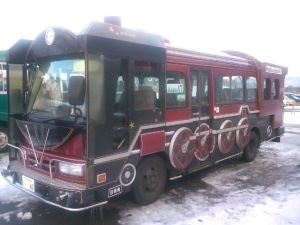 Sorry, the rest of the pics could never live up to this level of awesomeness. But they are quite nice… in a scenic type way!

We also had a brief walk around Matsumoto city. We did go to the castle before snowboarding, but I forgot my camera! Rookie mistake. 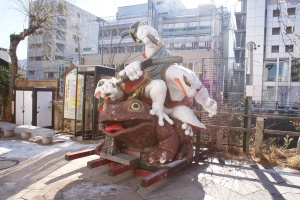 Matsumoto is famous for frogs. Frogs with Samurai swords…?

The city has an old market street (Nawate St.) going along the river.

There is also the Matsumoto City Museum of Art, where you are greeted by a rather large and colourful sculpture by famous local artist Yayoi Kusama. 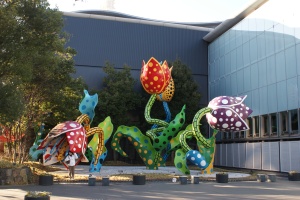 ‘The Visionary Flowers’ by Yayoi Kusama. I like it.

Back in Tokyo, we went to Akihabara to vist an ever-so-slightly-less-busy-than-everywhere-else shrine… 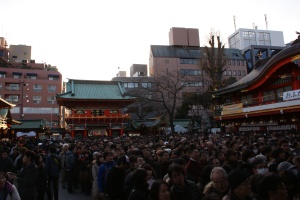 And saw the ultimate geek hotspot. 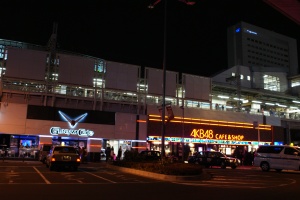 That’s all from me for a few days, back to work, lots of drawing and painting to be done!